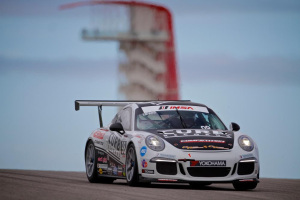 Austin, Texas – Competition Motorsports kicked off a big weekend at a big track in good form this weekend as Michael Lewis topped the field in qualifying for Race 1 of the IMSA Porsche GT3 Cup Challenge USA presented by Yokohama at Circuit of the Americas Thursday afternoon. Lewis turned his fastest lap of 2:13.546-seconds on his very first lap out with a flyer that was a second faster than the rest of the field.

“It was great that I was able to go out there and be so quick right away,” said a pleased Lewis after qualifying. “Because from a strategy standpoint we looked at the track and at our tires and saw that in the heat here in Texas they just aren’t lasting that long. Yokohama gives us great tires and they have amazing grip, but the intense heat here in Texas is a challenge. So we planned accordingly and set the car up and as a driver I had to do my part too. For the races tomorrow, balance will be so important but a big thanks to the guys for giving me a great car and making this possible.”

For the first race on Friday, Calvert-Jones will start in Platinum Class competition from ninth position, after putting down a quick lap time of 2:15.406-seconds in his No. 12 Wheels Up Competition Motorsports Porsche 911. Calvert-Jones will keep himself extra busy this weekend pulling double duty as he will hop in a Mustang to race with Racers Edge in the IMSA Continental Tire SportsCar Challenge in between the two GT3 races on Friday.

“This is the first race here for some of the guys and they have all been doing so well,” commented Team Manager, Bob Faieta after qualifications. “The crew guys have also just done an amazing job, especially with the tricky conditions so far this weekend. Michael (Lewis) obviously also did an amazing job as he was able to just get out there and do what he needed to do right away and park it the rest of the session, so we are feeling good and looking forward to racing tomorrow.”

The first of the two 45-minute sprint races is set to go green on Friday morning at 8:00 AM (CT) with the second to follow Friday evening at 7:25 PM (CT).