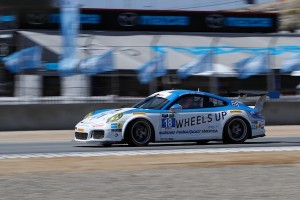 Watkins Glen, NY — Having kicked off the racing season with a run to the podium in the Liqui-Moly Bathurst 12-Hour, Australian racer David Calvert-Jones will add another big race to his 2014 campaign this weekend as he is set to contest Sunday’s Sahlen’s Six Hours of the Glen in IMSA TUDOR United SportsCar Championship competition with Muehlner Motorsports.

The Muehlner Motorsports line up for the No. 18 Wheels Up Porsche GT America will see Calvert-Jones sharing the driving duties with experienced New England-based racer Peter Ludwig and another fellow GT3 Cup USA competitor Patrick Otto-Madson.

“I got drafted in yesterday to drive in the Muehlner Motorsports Porsche GTD, which is exciting,” said Calvert-Jones, who also raced for the team at Mazda Raceway Laguna Seca. “I’m looking forward to being back with Muehlner and having a good race. I’ve done two Bathurst 12 Hour races, two Sebring 12 Hours, a Petit LeMans, and the 25 Hours of Thunder Hill – I can get into a rhythm in the longer races and I really enjoy it. It’s going to be hot on Sunday so that will be a factor too.”

Calvert-Jones will have a busy weekend as he is set to also race in both rounds of IMSA Porsche GT3 Cup USA by Yokohama competition with Competition Motorsports in the No. 12 Wheels Up Porsche 911 GT3.