Austin, Texas – In rapidly drying conditions, Competition Motorsports’ Mark Nelson took the green flag for today’s Pirelli GT3 Cup USA Trophy season-finale at Circuit of the Americas from the pole position and never looked back, taking his first victory of the year. But behind Nelson, the battle raged between the top-five, with positions constantly changing through the rain shortened event.

Nelson – a former Platinum Class champion – had earned the pole position in his No. 46 Porsche 911 GT3 Cup Car earlier in the day and refused to relinquish the top spot. He stayed in front of his Diamond Class competitors at the start, and once again on the restart following the race’s only full course caution, to earn his first victory of the season. Nelson’s relatively uneventful race was not indicative of the fight for the podium spots behind him, however, as four drivers battled throughout the race, swapping positions with clean and aggressive racing. In the end, Kelly-Moss Road and Race’s Russell Ward took his second podium of the weekend with a runner-up finish, with Nelson’s teammate Michael Zuieback coming home in third position.

“That was a blast!” Nelson exclaimed. “I love the rain – it took me back to my old rally racing days, sliding around and having a good time. There was a lot going on behind me and it was just about managing the gap and managing the tires. I could keep just enough of a gap without pushing the tires too hard since it was a short race. The only thing was on the restart I needed to make sure I got a good start, and by turns 2-3, I was able to create and maintain a gap. The track was drying up so the tires started going away a little bit, so not burning the tires up was the key piece for me today.” 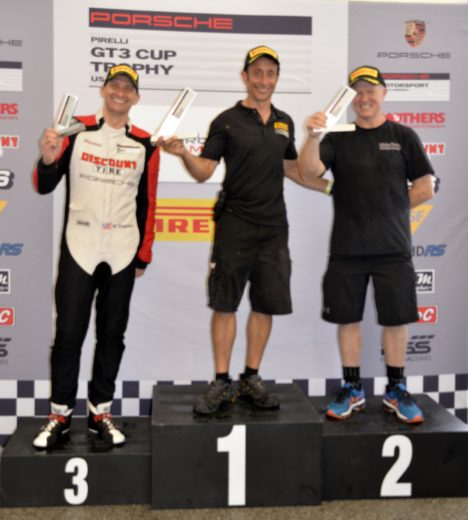 With conditions quickly shifting from dry to outright downpours in the hours before the race, each team had a decision to make: head out for the eight-lap, 20-minute event on wet tires, knowing the track was quickly drying, or make the risky move of starting the race on slick tires and hoping for the expected rain to stay away. In the end, both Aasco Motorsports drivers chose the latter, contesting their Platinum Class race on slick tires. Alex Kirby started his No. 01 LA Prep Porsche second overall but had to concede positions early in the race, as the track remained wet and he 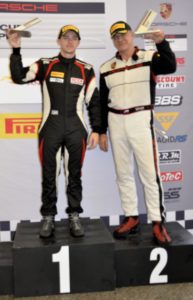 fought for grip. But as the track dried out, the race came to him as he brought the car home for his second victory of the year, ahead of his teammate John Krieg.

“We were looking for the opposite of water out there!” said Kirby. “We were probably the only ones that chose slick tires. It wasn’t the best first half of the race, but the tires started to kick in during the second half of the race because when everybody else was searching for water, our car started was finally happy. It was tough the first couple of laps, but we knew going into the race that it would be that way for the first few laps. There was more grip at the end for the slick tires and I just capitalized on those certain spots. I’m having a really good time in this series. There are great people, great cars, and great tracks so I can’t really complain!” 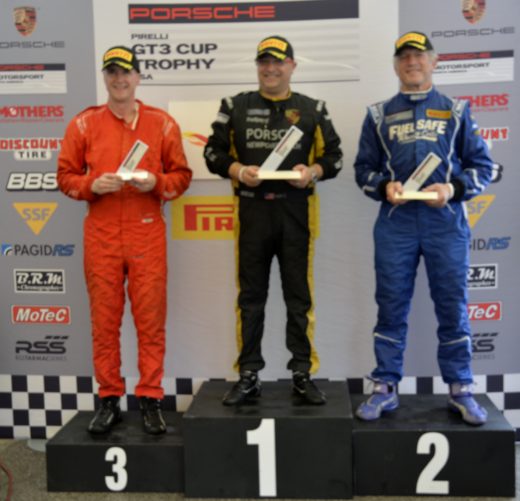 “It was very slick, but I like the rain,” said Shahi. “It was a little iffy because the track had both wet and dry spots. At the end it was dry and we had to find patches of water in order to cool the tires. Overall I had a good start again and I kept it clean. Again, the double yellow came out and I thought “there goes my gap!” But I was able to pass a couple of cars and put a little bit of space between me and Larry (Schnur, TruSpeed Autosport teammate). Overall, with two wins this weekend I couldn’t ask for a better way to finish out the season.”

With torrential downpours and lightning in the area just after the GT3 qualifying session on Sunday, the starting positions for the Silver Classes were determined by placement in the morning’s practice session. 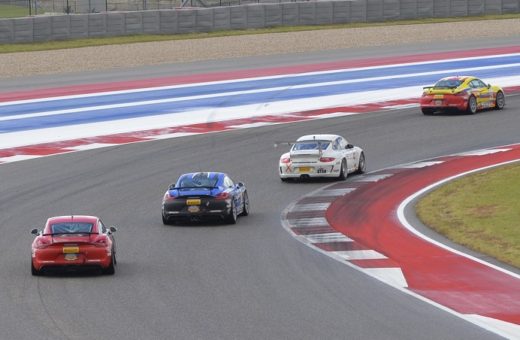 NOLA Motorsports’ Keith Jensen started from pole position in the No. 51 Porsche Cayman GT4 Cup Car and held the lead for his fourth victory of the season. Behind Jensen, the championship title contenders battled for both position in the race and for the title honors. With Kevin Woods starting fifth in his No. 94 BR Racing Porsche, and Sean McAlister seventh in his No. 00 Competition Motorsports entry, the fight had only just begun when McAlister came upon another Silver Class competitor, who had spun and was attempting to re-enter the track. McAlister took the worst of it, with damage to the side of the car that sent him to the back of the field. Woods finished fourth, behind second place Matthew Travis (NOLA Motorsports) and Carl Tofflemire (Competition Motorsports), with McAlister ultimately finishing 10th.

Jensen was understandably happy with his race and the opportunity to put his rain skills to good use. 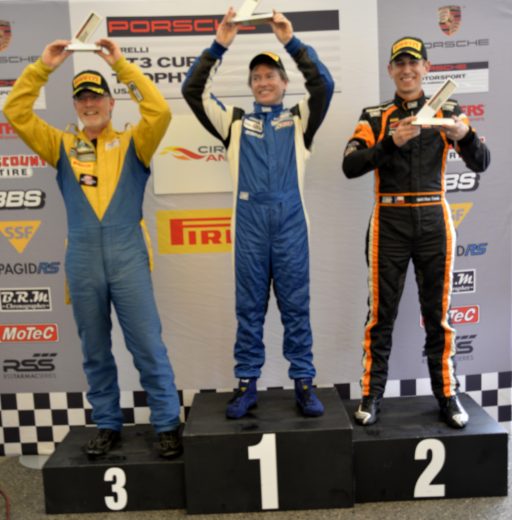 “Rain racing is my favorite,” said Jensen. “All driving takes skill, but driving in the rain is a different level. Everything happens much faster and so much less predictably. The first half of the race was semi-rain, but the second half almost felt like rain racing, because we were out there on a drying track with rain tires! Every lap was completely different but it was crazy fun. I’m happy with the result, but I’m sorry for some of my competitors, especially those who were caught up in mishaps not caused by them.” 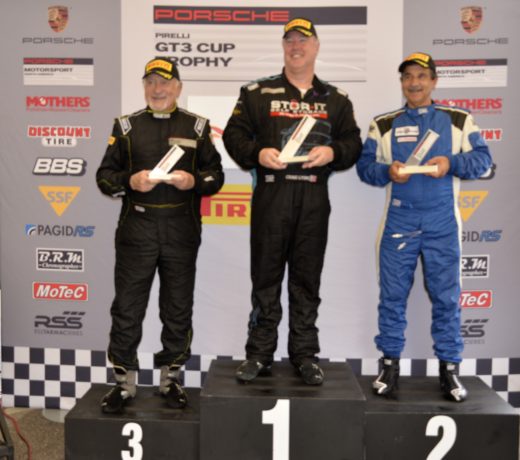 “I have fun in the rain, I don’t know why!” said Lyons. “I’ve always been very comfortable. I was very lucky this weekend: I had two good starts, with a car that was just dialed in, and I was in a position to control my own race. Everything changes in terms of your geometry as the track starts to dry but luckily it was a short race. But I love this track and I’m really happy. I’ve had a brutal year so to get a first and a second is a great way to end the year!”

Pirelli GT3 Cup Trophy USA President Greg Franz was thrilled with the outcome of the season-finale. 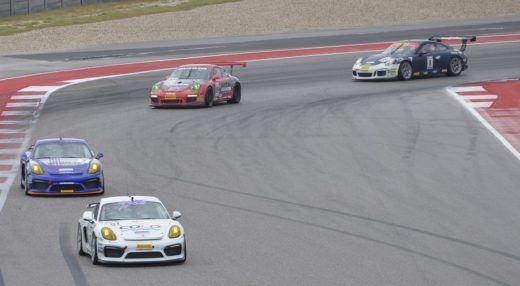 “Part of our series is about racecraft,” said Franz, “and so the drivers had to take a look at how they could best play the strategy with the weather. It was an ongoing situation, with conditions changing every hour. That just added a dimension that we haven’t had to deal with before. We’re really excited about the weekend and the competition we saw out on track. I think everybody is going away from COTA with a smile. With as much fun as we had in 2016, we’re going to have even more fun in 2017!”

With the Diamond and Platinum class championships virtually decided, both Robert Todd and Tom Haacker opted not to compete in Sunday’s race. Todd took the opportunity to drive one of the series’ pace cars during the event. (add photo)

Competent Motorsport thanks all of its competitors for a great year of racing!