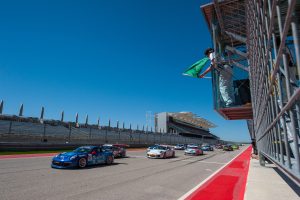 Newport Beach, Calif. (12 April, 2017) – The 2017 Pirelli GT3 Cup Trophy USA championship will launch this weekend with a double-header race weekend at Thunderhill Raceway. The event is the first of eight race weekends that will see the all-Porsche category visit some of North America’s best tracks, including Sonoma Raceway, Utah Motorsports Campus, Mazda Raceway Laguna Seca, Circuit of the Americas, and Road America.

While the drivers and teams have tested and tuned to be prepared for the 2017 championship, Competent Motorsport has also completed an off-season strengthening of staff. Steven Costello has been named Series Director, with Randy Buck joining the program to manage the on-track activity. Returning to the series is Craig Stanton, who brings his extensive experience and instructing ability to his role as series coach, available to the entire field of racers.

The Thunderhill event will open with practice on Friday. Saturday and Sunday will each feature two complete race days comprised of practice, qualifying, and a forty-minute race.

“It seems like it has been a long time since our last event, and I know our whole paddock is ready to get back to racing this weekend,” said Competent Motorsport President Greg Franz. “We will continue to have another strong field this year, and the Thunderhill entry reflects that well. Everyone is looking forward to getting to know Steven (Costello) as he moves into this important role with us as we continue to raise our level of professionalism and create a positive experience for our drivers and teams.”

The Thunderhill event kicks off with practice on Friday, April 14.