LAS VEGAS – Competition Motorsports’ Michael Zuieback and teammate Sean McAlister took the overall victories in the two races that comprised Round 1 of the Pirelli Trophy West USA series on a very windy Saturday on the road course at Las Vegas Motor Speedway. 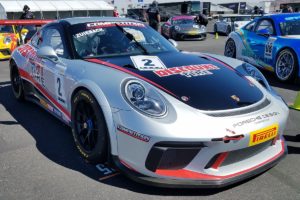 Given the size of the field, organizers altered the race group split: for this event only, the Diamond Classes raced together, with Platinum, Gold, Silver and Bronze competing in a separate race. At subsequent Pirelli Trophy West events, classes will be split by  911 GT3 Cup Cars and  Cayman Clubsport GT4 cars.

Despite winds gusting over 30 mph across the Nevada desert, the competitors enjoyed two caution-free 20-lap races highlighted by numerous passes and race-long battles.

In the Diamond Class event,  2017 Diamond Class champion Loren Beggs in the No. 08, 911 Design,  991 GT3 Cup Car to lead the field to the green flag. Beggs got a solid jump at the start but Diamond Masters competitor Michael Zuieback, driving the No. 2 Porsche for Bob Faieta’s Southern California-based Competition Motorsports, kept the pressure on, reeling him in as the early laps progressed.

Zuieback set up Beggs on the front straight, dove to the inside and made the move stick, taking the lead on the inside of Turn 1 on Lap 6, with Beggs pulling into pit lane at the end of the lap with a punctured right rear tire.  Zuieback took the checkered flag with a whopping 38-second lead over his teammate and fellow Masters class entrant Mike McAlister.

Jonah Yokubaitis, driving for TruSpeed AutoSport in his first Porsche race, came back from early contact with McAlister to take the Diamond Class win and third position overall ahead of Beggs.

“This is my 11th month in a race car,” said Yokubaitis.  “And my first Cup Car race. It was a fun race with Mike! It’s been a really fun experience, I’m really looking forward to tomorrow!”

In the second race, Sean McAlister, moving up from the Silver Class this season to the Platinum Class, put his No.00 Competition Motorsports, 991.1  GT3 Cup Car on the pole and after an early battle with 2016 champion Ray Shahi, pulled away from the field to take the victory – and the chance to view traffic from a different perspective. 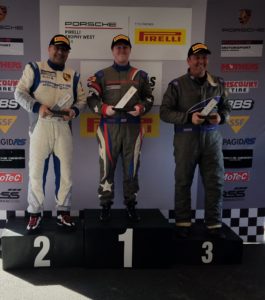 “It was great running the new car,” said McAlister. “And it was interesting to see the race from a different angle, since I was the one doing the passing! Pretty much everyone did a great job, looking in their mirrors and making sure where I was. I’m looking forward to the next race when we’re racing against the faster cars. That will help me get more experience racing and that’s what I’m really focused on right now.”

In the Gold Class, Leon Desimone scored the win for Dennis Aase’s AASCO Motorsports  in his first race in the series

“These cars are so much fun to drive!” said Desimone. “I just love doing it. I watched Edie (Arrowsmith), who moved up to the Diamond Masters class this season, drive this car all of last year and she got a new one so I thought I would race it this year. I can’t wait to do it again tomorrow!”

Teammates Chris Bellomo and Jim Rappaport, driving for The Racer’s Group, battled between themselves for the Silver Class victory, with Bellomo, driving the No. 67  Cayman GT4 MR, making the move on his teammate on Lap 14 and holding the advantage to the checkered flag.

“There’s definitely a level of trust,” said Bellomo. “Jim and I have been testing a lot over the past six months, so we’ve gotten to know each other’s driving habits, so that makes it fun. It was pretty dusty out there toward the end but the racing was clean and that’s what matters.”

All eyes were on the Bronze Class battle, with Laura Ely starting just ahead of Competition Motorsports’ Carl Tofflemire. Tofflemire made his move at the start, with Ely falling into the clutches of several Platinum Class competitors and working to fight her way back to the lead. Tofflemire kept his eye on his mirrors for the final four laps and took the victory, with Ely right behind battling nose-to-tail in hard, close, clean competition.

“I was watching in my mirrors for her the entire race,” said Tofflemire. “I was thrilled when she came back to me because at one point, there were three cars between us. I had picked up a pretty good push so she had me covered at the end, so it was heads up driving, good luck, and great preparation by the team and Porsche South Bay that got us the win.”

“The start is what got me,” said Ely. “I caught the GT3s too quickly and Carl got a run on me – and he has more experience passing them than me. I was keeping pace and made it through. We could have gone side-by-side across the finish!”

The Pirelli Trophy West USA series will return to Las Vegas Motor Speedway’s road course for Race 2  Sunday with the green flag set to fly at 1:05 p.m. PDT. Live timing and scoring can be followed at:
http://www.competentmotorsport.com/index.php/live-timing/