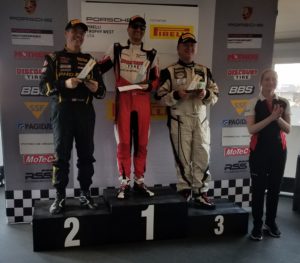 Thermal, Calif. (8 April 2018) – The battles were as heated as the weather on Saturday, as Kevin Woods and Carl Tofflemire each took overall victories in the Pirelli Trophy West USA series at The Thermal Club near Palm Springs, California as the series staged separate races for the GT3 and GT4 class machines for the first time.

With temperatures in the California desert approaching 100 degrees F, swirling winds and dust clouds around the four-mile, 24-turn GT Track meant that the drivers had to manage not only their competitors but also the changing conditions. 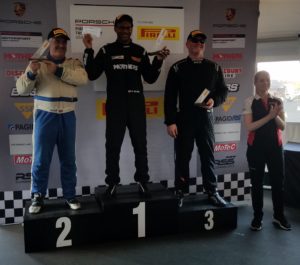 The classes were split into two races, with Silver and Bronze classes in the first race and Diamond, Diamond Masters and Platinum in the second.

Woods, driving the No. 94 Mothers Polish/TruSpeed AutoSport 991.2 GT3 Cup Car, led all four practice sessions, took pole and held the lead through the full 40-minute flag to flag event. A first lap incident caused the first three laps to proceed under caution, but when the green flag came out for good, Woods got the jump and took the checkered flag by nearly 13 seconds over 911 Design’s Loren Beggs. After an early race battle with Beggs, Michael Zuieback (Competition Motorsports) took third overall and his third straight Diamond Masters class victory over Preston Calvert and Jim Walsh. 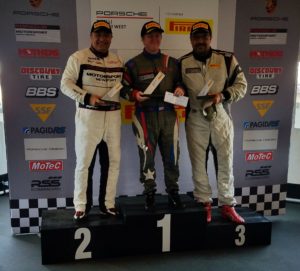 “The TruSpeed Autosport team gave me another awesome car today,” said Woods. “It was so fast. But you can never count out Loren (Beggs), he’s fast. Considering the heat, the track wasn’t that bad. But coming out of the carousel, I got hit by one of the “dust devils” and drifted all the way around the high-speed corner. I tried to take it easy from there but kept my focus to the finish. It wasn’t easy, but it was fun!”

“I got a good jump on Loren at the start,” said Zuieback. “Beating Loren off the start is not easy, I got lucky. After the caution, I made an error and Loren got by – and since he’s in the class ahead, I didn’t want to battle too hard with him, and then fall back into Preston’s clutches. I had a lot of fun trying to keep up with Loren for the rest of the race. It was slick out there, it was hot, it was dusty – it was a tough race, but we came out ahead!”

In the Platinum class for 991.1 Porsche GT3 Cup Cars, Sean McAlister put his No. 00 Competition Motorsports machine on the pole for the third straight race but TruSpeed AutoSport’s Ray Shahi made a lap-one move to take the position. As the green came out after the caution, McAlister made a daring move on the outside of Turn 7 to retake the lead. Shahi finished second, with Pinnacle Motorsports’ Gary Ferrara third. 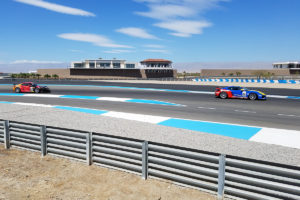 It was the first experience racing against the faster Diamond class cars for the GT4 class graduate, an experience McAlister had been anticipating since he made the decision to move up a class.

“The car in front of me checked up at the start, and I lost some momentum  and that let Ray by,” said McAlister, “I got him back pretty quickly after the restart, on the outside of Turn 7, which was probably a little crazy. But it was a lot more difficult than I thought it would be, racing against the Diamond class guys! Those cars are very fast in a straight line, so I couldn’t catch up, even under braking. But it was a lot of fun!”

Tofflemire and Laura Ely rejoined their Bronze class battle, having split the two races in Round 1 at Las Vegas. In the 9-lap, 40-minute flag to flag race, Tofflemire kept his No. 62 Porsche South Bay/Competition Motorsports Cayman Clubsport GT4 Trophy Porsche at the front of the field despite race-long pressure from Ely, who took several looks but could not distract Tofflemire into a mistake. Ely had a moment on Lap 6, with a quick spin in the dusty Turn 7, but got back on track quickly without losing a position. Martin Brauns (Flying Lizard) took third in the class after a late-race, back-and-forth clash with Silver class winner Chris Bellomo, driving the No. 67 TRG Cayman Clubsport GT4 MR.

“Another amazing race!” said Tofflemire. “Laura (Ely) is an amazing competitor. We were laying down lap times within tenths of each other. When she got a bit sideways, that let me get out front a bit but she was gaining on me at the end. It’s incredible – you can sometimes see someone check out and you’re out there basically driving around. But Laura and I are in contact the entire time and that’s as good as it gets.”

“It was a hard-fought battle between Martin (Brauns) and me the whole race,” said Bellomo. “We exchanged position at least four times. We just met today, and it was good fun and clean racing! It got hot out there and there was a lot of rubber down, so managing the car and the tires was key and I think we all did a good job out there.”

The Pirelli Trophy West USA will return to The Thermal Club for Race 2 on Sunday with the green flag set to fly at 1:30 p.m. PDT for the GT 3 Cup race 2:45 p.m and for the GT4 Cup race. Live timing and scoring can be followed at http://www.competentmotorsport.com/index.php/live-timing/