Thermal, Calif. – As Competent Motorsport continues its celebration of the organization’s 10th year, the Pirelli GT3 Cup Trophy USA championship embarks on a new circuit this weekend at The Thermal Club, about 30 miles outside of Palm Springs, California.

The private motorsports venue is a relatively new one having held is first official race event in 2014. Designed by Alan Wilson, the track has 4.5-miles of asphalt with the flexibility to run 20 different configurations. This weekend, the Pirelli GT3 Cup Trophy USA will utilize the ‘Two Palms’ circuit which features 3.1-miles of racetrack with 18 unique corners.

The 2016 Pirelli GT3 Cup Trophy USA championship kicked off one month ago with some strong competition among its four different racing divisions with each class – Diamond, Platinum, Platinum Masters, and Silver – putting on quite a show through two races of all green flag running. A similar showing is expected for this weekend’s event at The Thermal Club.

Robert Todd leads the Diamond class championship following the first round of competition after he swept both races at Circuit of the Americas.

“The results that we had at Circuit of the Americas were nothing short of awesome, both for myself and for the BR Racing team,” said Todd. “It really helps boost the morale of the team by winning and then going right into the next event. We are confident in the car and the team going into Thermal, but the entrants for the Thermal race are much different than COTA and that may sway the points a bit depending on the results. For many of us, the Thermal track is a new one. The facilities are growing and still improving but so far they have really impressed us all, and they have done a great job of welcoming us and making us all feel like members.”

John Krieg holds the Platinum class championship lead after the Circuit of the Americas event in which he won Race 1 and placed fifth in Race 2. He’s particularly looking forward to this weekend’s event at The Thermal Club as it’s a circuit in which he already has experience.

“Thermal has some very good technical aspects which I always appreciate,” offered Krieg. “Several of the turns come up fast and the track keeps the driver working; however it also has a couple of good straight sections to collect one’s thoughts while enjoying high speed before going back to hard work. Being in the desert there is always dust and sand blowing so staying in the groove is important as the dust and sand can be slick, thus adding an additional challenging element to our choice of racing line and in passing.  All in all the track is laid out so that even if one has a “racing moment” the car can stay safe.  It is a very good track and lots of fun.”

Youngster Sean McAllister impressed in his first-ever car races at Circuit of the Americas with his double podium finish that sees him atop the championship standings in the Silver class, which features the Porsche Cayman GT4 ClubSport.

“Going into Thermal leading the championship is definitely a confidence booster since I’ve never been in a championship before and Circuit of the Americas was my first couple races ever,” said McAllister. “As long as I do what I did at COTA, race clean, fast, and consistent, I can see myself doing just fine this weekend. I ran at Thermal once before for a one day practice session. I loved the track, it has the perfect balance between long straights and quick tight corners. I’m looking forward to going back.”

New for The Thermal Club weekend will be the introduction of the Silver Masters class.

Larry Schnur leads the way in the Platinum Masters championship after a solid run at Circuit of the Americas.

“Since this is my first full season in the Porsche GT3 Cup Car, I’ve spent a lot of time with my coach, John Olsen, and the guys at TruSpeed testing and learning how to get the most out of the car,” said Schnur. “I’ve also received a lot of support from my new sponsor, FuelSafe. The Circuit of the Americas wins were very gratifying and confidence boosting. Everything we learned and honed there will hopefully help us to be successful at Thermal. I’ve only tested there before. The track’s layout places a premium on exit speed and qualifying is going to be very important since passing on this tight layout will be difficult. I’m really looking forward to racing at Thermal.”

The Thermal Club event weekend kicks off on Friday, April 8 with three practice sessions followed by two days of racing on Saturday and Sunday.

Live timing and scoring can be followed throughout the weekend at: http://www.competentmotorsport.com/live-timing/. 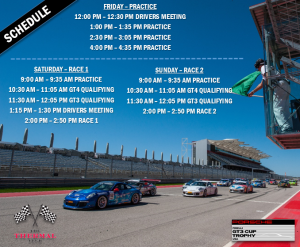